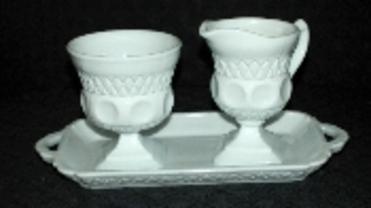 The origin of Kings Crown or Thumbprint Patterned Glass


The pattern, produced by both Indiana Glass and Tiffin Glass was originally calledExcelsior as manufactured in the late 1800’s by the Adams Glass Company.

The pattern gained popularity in the late 1800’s due to its’ clean lines and at thetime deep ruby staining of the top portion of the piece.

The glass was quite heavy and thick in order to accommodate the very deepthumbprints on the lower portion of the body of the pieces, mainly creamers andopen sugar bowls.   The creamer from Adams is the widest just above the base, the lower one third imprinted with nine (9) round prints with a raised zig-zag lineboth above and below the thumbprints.  The handle of the creamer was applied.
On the underside of the base there is a 12 point rayed star with a slightly raised middle die mark meant to imitate a ground off pontil mark.

The Ruby Thumbprint creamer gained enormous popularity at the Chicago World’sFair as being offered as a souvenir many people had their names etched into theruby portion to indicate that they had Indeed attended this historic World Fair.

The pattern was produced by many as there is a difference in the details of the Adams Glass pieces of this pattern.

A common misconception among collectors of this pattern is that Indiana Glasspurchased the Adams molds from Tiffin Glass after they ceased production.
Indiana Glass catalogs before this time however show the pattern was in
production at the same time as Tiffin Glass was also making this pattern.
The early Indiana Glass pieces were in clear crystal as well as crystal with ruby staining.
In the mid to late 1960’s Indiana Glass was manufacturing this popular pattern inamber, olive green, smoky blue and milk glass.  The staining colors included ruby,cranberry, yellow, gold and platinum.  When Indiana Glass acquired US Glass themolds were retooled and incorporated into the vast collection of Indiana Glass.  Thecompany continued to make this pattern well into the 1990’s in a rainbow of coloredglass.  The last color being produces was an Imperial Blue color.


The Kings Crown or Thumbprint pattern from Tiffin Glass however has the
elongated thumbprints which following the Adams tradition are more oval in shape
The thumbprints of the Indiana glass are rounded in shape.

When looking at tumblers of this pattern, those from Tiffin have a slight flaredtop rim whereas those from Indiana Glass are straight.

When appraising the staining/flashing of a particular piece note that Tiffin used a flashed glass method to add color whereas Indiana used a solid colored glass. Early mechanized glass production found that, applying a ruby stain to a clear piece was an inexpensive method to provide color.

Not a true "cranberry glass," made with a gold-based process which actually transferred a red color into the glass before it annealed.
Indiana Glass Kings Crown has 2 mold marks; the Kings Crown from Tiffin has three.