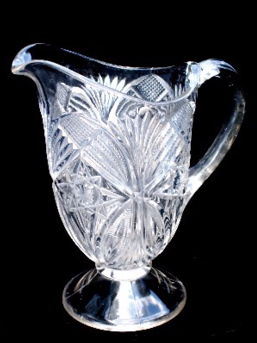 Founded as National Glass Company, the earliest glassware items attributed to the Cambridge, Ohio factory were actually heavy pressed patterns rather than handmade etched glass. The company used the mark "Near Cut," according to the National Cambridge Collectors (NCC) Web site. These early 20th century glass gems impersonated popular styles of hand cut glass that had become too costly to produce although the look was still in demand.

After running upon some hard times during the early 1900s, the company's manager, Arthur J. Bennett, raised the funds required to purchase the factory in 1907. Bennett continued to refine and grow what became the Cambridge Glass Company under his ownership.

The Birth of a Familiar Mark and Favored Styles

During the company's expansion in the 1920s, Benett introduced the well-known C within a triangle trademark. This mark doesn't show up on every item that left the Cambridge factory, so when collectors run across a signed piece they enjoy the find even more. A mark doesn't necessarily add value to the commonly recognized patterns, however.

By the 1930s, Cambridge Glass Company introduced some of its most interesting wares from a collecting standpoint. Throughout the '40s, homemakers entertained and decorated with the most popular Cambridge patterns. From the famed Rosepoint etch to the cool blue of the Caprice line, collectors clamor to own these sparkling treasures today.

Cambridge Lives on After Factory Closing

The manufacture of these popular glass items continued into the early '50s when business began to slow. Although Cambridge won national acclaim in 1950 for the modern design of its Square pattern, the company closed in 1954. The entity simply couldn’t compete as the demand for handmade glass decreased and suppliers of machine made glass began to dominate the industry. After a brief reopening, Cambridge closed shop for the final time in 1958.

Imperial Glass Company eventually acquired the Cambridge factory and molds in 1960. When Imperial went bankrupt in the early '80s, many of the molds, all of the etching plates and numerous other assets once belonging to Cambridge were purchased by the NCC and reside in the organization's museum today.

In our on line store we currently have available the Feathered Ovals Water/Beverage Server which is identified in the Standard Encyclopedia of Pressed Glass by Bill Edwards and Mike Carwile on Page 110.

This pattern has also ben referred to as "Near Cut" 2579.  The workmanship is exquisite!