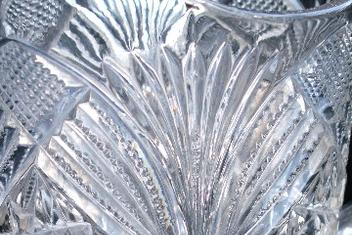 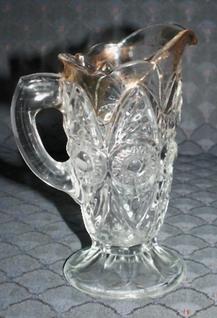 From the earliest of times, glass has contained lead, the densest of elements, used to give the glass a "ring" to it as well as to increase its' density, allowing the deep and precise cuts of American Brilliant Cut glass and the superior quality for pressed glass patterns.
During the Civil War, much of the available lead was used in the manufacture of munitions, leaving the glass industry to substitute in its place soda lime, a combination of the oxides of sodium, calcium, silicon, aluminum, sulfur, phosphorus magnesium, titanium and iron.
The various glass houses of the time each had their own secret formulas, varying the composition of the different oxides to each produce their unique blend of glass. The first recorded instance of soda lime glass is attributed to William Leighton in 1864. With the Lead containing glass, the higher the percent of lead, the deeper the tone of the ring of the glass piece, and I might add, the higher the value of the piece. Generally Flint Glass is deemed of higher value, though not always. Another consideration is the design of the piece/pattern.
Two Soda Lime patterns which have a much higher value than any other flint glass pieces are "Jumbo" and Squirrel", both of which have rather intricate designs. (More on these patterns to follow!)
Many of the older patterns were made in both the Lead containing Flint Glass and the soda lime glass compositions, such as "Ashburton".
When purchasing a piece of glass determine whether it is lead or soda lime merely by tapping the piece.
It also helps to know the name of the pattern/mold and whether it was produced solely in Flint or Soda Lime or both configurations. Be aware that when tapping a piece, the inherent shape, such as a the bowl of a goblet, may cause the piece to resonate, but in comparison to flint glass the ring is quite muted.
Soda Lime glass moreover does not have the brilliance of the leaded flint glass, but this is a difficult comparison as pieces of both are needed.
Type your paragraph here.

And the glass story continues...