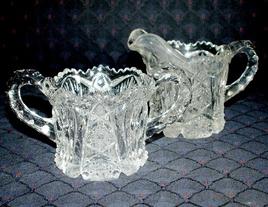 The use of a "black light" is used by many collectors of antique items, not just those of glass.

The Black Light gets its name from the fact that it emits short wave, high energy light that is at the far end of the Electromagnetic spectrum. The light from a normal incandescent light bulb is in the middle of t he Visible Light Spectrum, rich in the yellow tones, while a fluorescent light emits in the upper blue range.

A black light is useful as the light waves are shorter, higher energy and are very quickly reflected by the piece, thereby creating the image of the piece "glowing". The glow of Vaseline glass and Green Depression Glass is a bright yellow green,, due mainly to the content of Uranium Oxide present in the glass.Turn of the Century (1900's) Early American Pattern Glass will most often produce a soft glow under the black light.

Some, but not all American Brilliant Cut Glass also glows under the black light, with the colors ranging from a pale yellow to blue to violet. The color discrepancy is due to the specific metal oxide which is included in the glass to give it its' density necessary for the deep cuts.

As metal oxides, especially Uranium Oxide,  are expensive, the cheaper reproduction pieces, some using the same molds, do not fluoresce or glow under a black light.

The black light test is not conclusive however for dating a piece of glass. As you can see, all that is necessary for the piece to glow is the presence of certain metal oxides. Often times reproduction pieces are made from "cullet" glass.

Cullet glass is a large batch of broken pieces of glass, discarded as unusable and ready to be raised atto temperatures which will melt the varied pieces to a liquid, at which point they can be mixed to uniformity.

All that is necessary for a reproduction piece to glow then is even a small piece of original Vaseline glass to be present in the cullet mixture.

The Black Light Test for glass to determine its' authenticity is but one tool the seasoned collector uses, and is not definitive in itself. Most experts will base their valuation of the piece on the size, shape, exact measurements and weight and do not solely rely on the black light test.

It is obvious that I don't trust the black light piece as the sole source for my judgment on a piece. While it was not common in the 1940's and 1950's to add uranium oxide to a mixture destined to become glass, in the 1970's manufacturers such as Mosser again began to add the ingredient. Mosser glass from the 1970's indeed glows, and using the same molds, the inexperienced collector may be led to believe that the piece is from the early 1900's and would not suspect it was actually made in the 1970's.

Black light testing is more of a tool when looking at fine, antique [porcelain pieces as and chips, or hair line cracks, which cannot be seen with the unaided eye will glow under the black light. The black light wills also pick up and glue or adhesive substance which may have been used in the repair of the piece.

Many antique banks and toys were made from cast iron in the early 1900'sGenuine articles are much sought after. Most modern day paints will glow under the black light. The black light is useful then to detect reproductions (if the entire piece glows) or repairs on an original piece.

All in all lack light testing does have its' uses, you should not however use it as the sole measure of a piece. Include it with other factors, such as the dimensions, look, feel  and weight of the object.